We'd love to hear from you

6 Costly Facebook Advertising Mistakes That Are Depleting Your Dirhams

At the time of writing this article, I’ve spent over 65,268 AED in Facebook ads for clients, across various industries.

That budget was used to generate leads, increase engagement, generate website traffic, get contest entries and fulfill a plethora of objectives clients have.

In order to make marketing work, you have to pay attention to the process, execution, and results.

Sadly enough, the grave mistake most brands in the UAE make is - launching a campaign to the wrong audience, while failing to monitor the ad’s performance in terms of engagement levels and results.

If the fundamentals are weak, the campaign will just not deliver.

This article was initially conceived in my head a few months ago but It’s about time I share my feedback and learnings with you.

Before I point out the 6 deadly sins of Facebook advertising, let me quickly explain the dynamics of Facebook marketing.

A lot of marketers approach Facebooks ads wrongly, and that’s the reason they fail.

You need to keep in mind that Facebook advertising is interruptive by nature.

By running an ad, you are interrupting their experience and that’s what builds the initial perception of your brand.

Your ad is literally a thumb’s scroll away from grabbing or losing the attention of your prospect.

If you create a poor ad, with baseless copy and a boring image, say goodbye to conversions.

And with an increasing number of brands flocking to Facebook for promoting their respective brands, it’s a rat-race for grabbing the attention of your prospects.

So make your ads worth their attention.

Reach is simply the number of people who see your ad.

Getting them to act on it is a whole different ball game. This article will show you how.

In this article, I’ll list down the exact mistakes you should stop making and how to actually help your Facebook ads perform better.

Mistake #1: Not Targeting the Right Audience

This seems to be simple, yet it’s one of the top mistakes of Facebook advertising in the UAE.

If you’ve used the Facebook Ads Manager, you’ll know about the detailed targeting mechanisms the platform has to offer.

Even then, thousands of brands go wrong with this critical step.

They either target the wrong audience or target everyone.

To not suck at this, understand the demographics, lifestyle and pain-points of your target customers to target them effectively.

In other words, create a buyer persona document that you can use to guide your Facebook ad targeting parameters.

With targeting options such as Location, Educational Qualifications, Job Titles, Purchasing Behavior, Life Events, Upcoming Birthdays, Existing Fans, Friends of Fans and so on, it really doesn’t get easier than this.

The audience parameters are so well-defined that you can even literally target vegan friends of young parents who like your page. 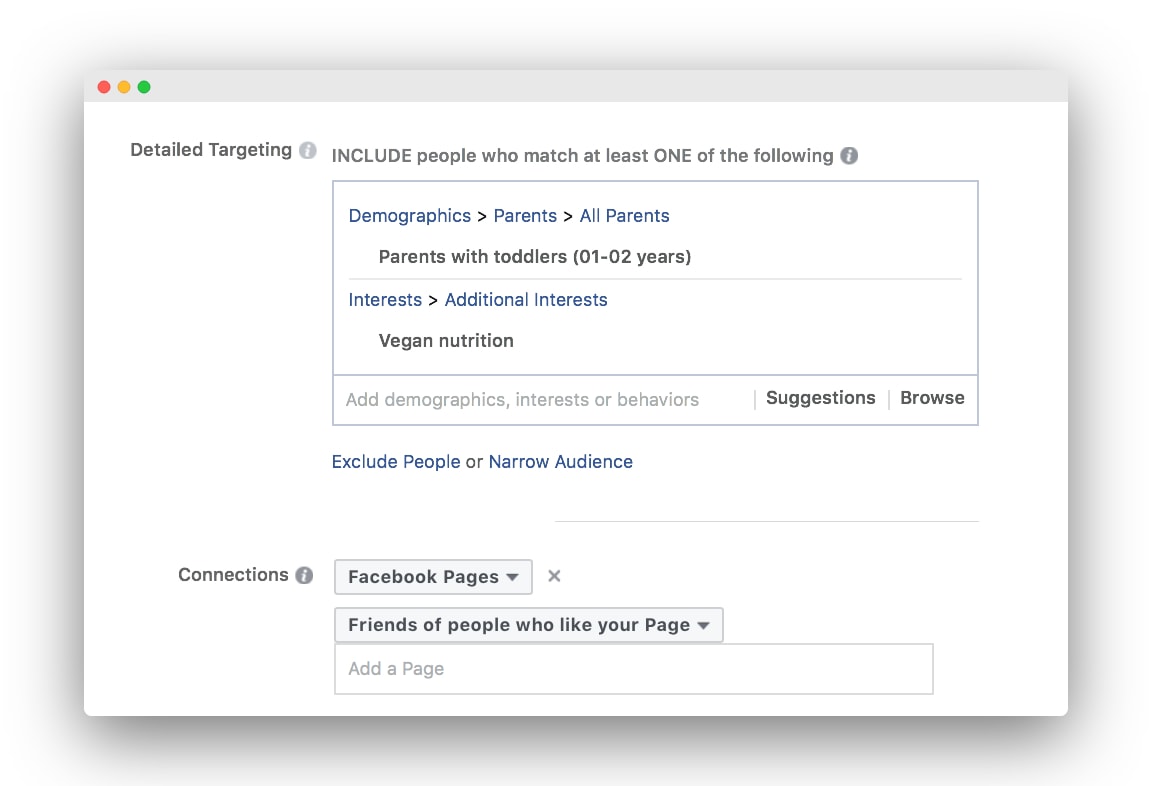 Just imagine the possibilities if your business is able to leverage Facebook’s audience database.

Be careful not to target too broadly or too narrowly.

Of course, there may be exceptions, if the product/service is geared towards a really niche segment.

But otherwise, this audience size helps Facebook’s algorithm figure out the right people for your ads.

Mistake #2: Not Testing your Ads.

If someone asked me to describe Facebook advertising in 1 word, I’ll say “Testing.”

Because there’s absolutely no guarantee that the first ad you create is going to get the cash rolling in.

And since marketing is a combination of art and science, you have to test multiple ads and then put your money on the best performing one.

Even if you think you’re getting good results from a single ad, you’re operating in an opportunity cost of not testing another potentially better ad.

In other words, your ad is only as good as the next better iteration of it.

But then the main question is:

What to test in an ad?

“How do I know what’s making it work?”

“What changes should I make to improve the ad’s performance?”

First of all, you need to understand two different testing mechanisms.

This basically means, that you can find out what type of ad performs better and why it does so.

When it comes to testing the TYPE of ad, here are some scenarios that you can use for comparison:

The image below will help you understand the structure and constituents of an ad. 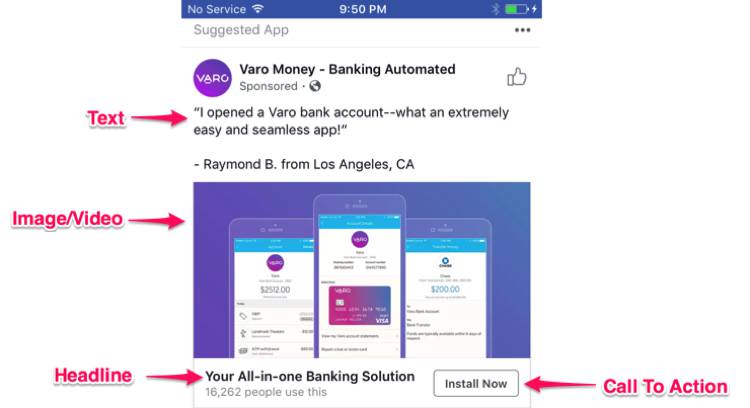 With so many different ad formats at your disposal, there’s really no excuse to run boring, conversion-less ads that are just depleting your budget.

This is also known as split testing, which is what A/B Testing is.

Split testing your ads helps you compare two or more ads against each other to gauge the performance and effectiveness of each.

It’s recommended to let the split test run for at least 7 days for the Facebook algorithm do its magic.

This is extremely critical for understanding WHY one ad performs better than the other.

As of now, on Facebook, you can test the following parameters.

You can learn more about each element here, thanks to Social Media Examiner

Mistake #3: Cannibalizing your own Ads

Yes, you read it right!

Ad cannibalization happens when one ad eats the other.

According to Wikipedia, cannibalization refers to a reduction in sales volume, sales revenue, or market share of one product as a result of the introduction of a new product by the same producer.

In Facebook terms, this is known as Audience Overlap, which basically implies that your ads are competing against each other for the same audience.

Having overlapping audiences isn’t always bad, but it may lead to poor ad performance.

As you might know, online advertising mediums work on an auction basis, where the highest bidder gets the premium spot.

So when the same advertiser (you), runs different ad sets targeting similar audiences, your ads start bidding against each other, thus depleting your budget faster than ever.

In other words, they’re going into the same auction and preventing each other from getting shown on users’ devices.

That’s why, Facebook created a tool called Audience Overlap that helps you check up on this, to make sure you’re getting the best value for your money.

In a case like this, their algorithm displays the best performing ad while preventing the low performing ones to save your precious budget.

The Solution to Prevent Ad Cannibalization:

When you’re trying to test out different versions of the same ad, make sure you separate them into different ad sets.

If you don’t separate them, Facebook will only display the best performing one from each ad set, rendering your test inconsistent.

Mistake #4: Editing your Ads too Often

Being a leading social media agency in Dubai, we get lots of requests from brands seeking answers for their ill-performing ads.

When we diagnose the problem, most of the time it turns out they’ve been editing their ads too often.

No wonder, the Facebook algorithm wasn’t getting enough time to learn audiences’ behaviour towards your ads and optimize them accordingly.

Just to let you know, the algorithm demands time and patience to test what audiences are fit for your ads, and who are most likely to fulfill your objective (whether it’s engaging with your post, watching a video, clicking on a link, etc)

If you edit your ads way too often just because you keep remembering to add elements to your active ads, their performance will go down drastically.

In fact, Facebook now indicates the progress of your ads by displaying the phrase “learning” next to it.

This is to help you understand that your ad is being learnt by the algorithm and will take some time to start delivering efficiently.

The best practice is to wait for at least 2-3 days before editing your ad.

Your patience will pay off, eventually.

Mistake #5: Causing Ad Fatigue (Stagnating on the Newsfeed for too long)

As human beings, we tend to get bored fairly quickly, especially when we’re exposed to the same thing for way too long.

You’ve been running a new marketing campaign on Facebook.

It’s going good, until suddenly you start seeing a dip in its performance.

It’s converting less people, and become costlier than before.

This phenomenon is called Ad Fatigue.

If you recall, at the beginning of this article, I mentioned that marketing requires supervision.

You cannot simply set up a campaign and move on, without looking back at it.

Consumer behaviour is dynamic, and that’s why your marketing should be too.

If your ad starts displaying way too frequently, your target audience will learn to ignore it.

Once that happens, the conversions are going to crash, because your audience has learnt to live with that intrusion on their newsfeed.

They’ll become indifferent towards your ad and will not bother checking it out.

This happens to the best of ad campaigns, leading to a change in other metrics like Relevance Score, Cost Per Acquisition, Cost per Video Views, Cost per Link Clicks and so on.

One way to beat ad fatigue is to change your ad image or the ad text.

In other words, refresh the image of your brand on users’ newsfeed so they see a new version of your ad.

Something different, something, colorful, something humorous. You get the point.

Your ad copy could be revamped too, so users get something new to read.

Our content writing team can help you out with that.

The ad copy will have to be either shortened or elongated, based on how the “fatigued” ad was.

This implies the frequency of the ads you’re running.

A lot of UAE companies have noticed their costs going up, once their frequency goes beyond 2.0%.

That’s when they know that the same people are being served the ad numerous times.

To combat this, most advertisers prefer keeping it between 1 - 2%.

Beyond that, they start noticing diminishing returns on their dirhams.

At this point, you should start refreshing the images, adding new text, changing the targeting parameters and so on.

If all goes well, you should start noticing some improvements.

For more information on combating ad fatigue, check out this guide by wishpond.

Mistake #6: Using too Much Text in the Ad Image

Stuffing ad images with text is one of the easiest ways to waste your advertising budget.

I’ve seen so many companies in Dubai completely ignore this aspect of Facebook advertising.

Let me simplify this.

Facebook has a rule of 20% text in an image.

Anything more than this can increase the cost of advertising, and in extreme cases, even shut down the campaign for having too much text in the image.

“If the proportion of text to image is too high, your ad may not reach its full audience.”

To make life easier for advertisers, Facebook has rolled out the Text Overlay Tool.

All you have to do is simply upload your ad image. The tool will then grade your ad image out of the following 4 criteria:

The following image is actual example of 2 ad variations being tested in the Text Overlay Tool.

You’ll notice how the tool detects the image with more text and gives it a lower rating. 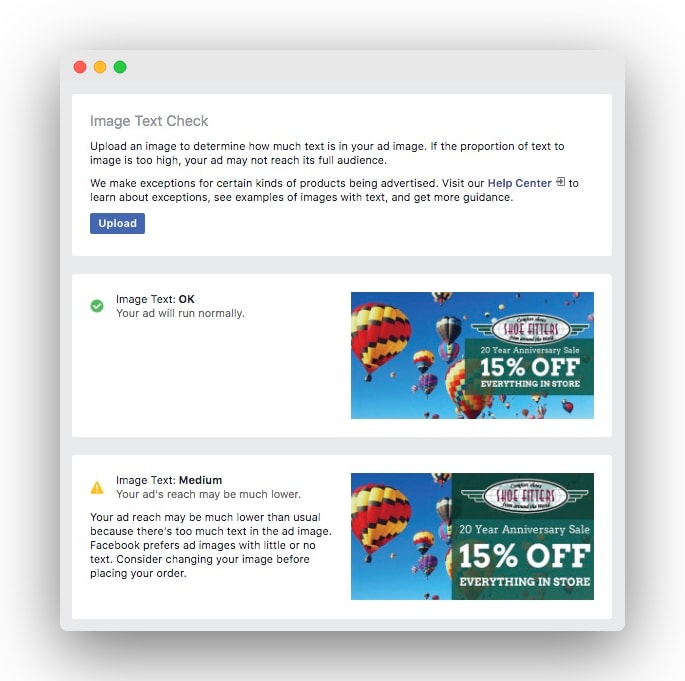 In a scenario like this, keep your text-to-image ratio under 20% to reduce the advertising cost and reach more people.

The purpose of this article was to highlight the mistakes that are costing you business.

After all, no one likes wasting advertising dirhams, when you could rather use it for lead generation

Being a social media agency in Dubai, we have the expertise required to avoid making these mistakes.

Don’t hesitate to get in touch with us if you need help with Facebook marketing. 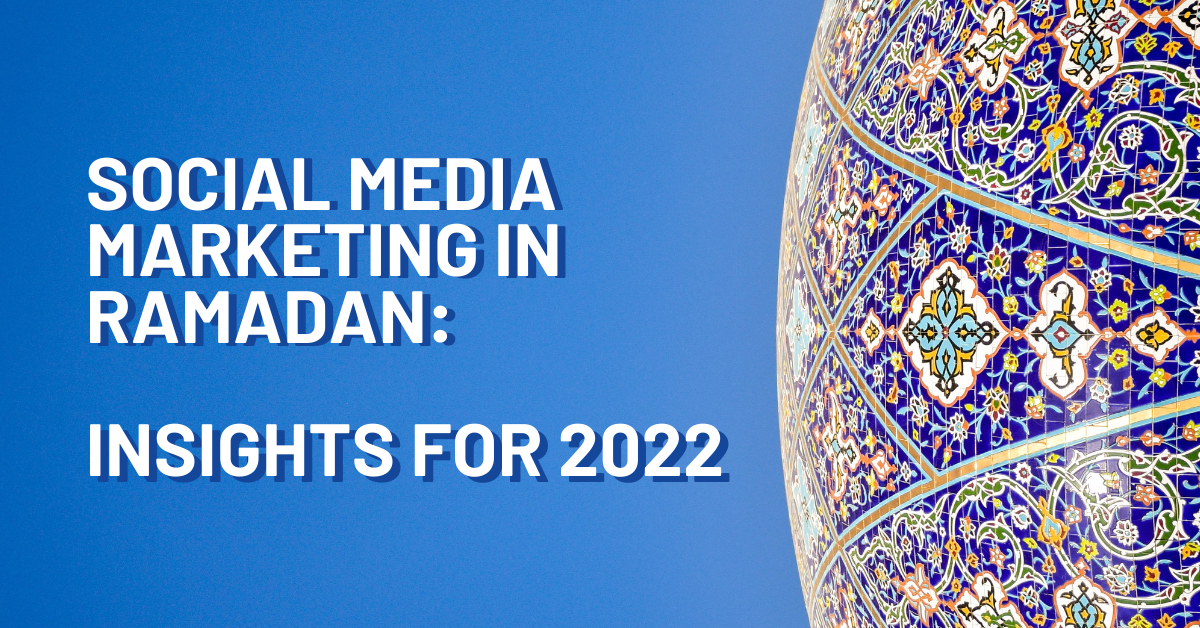 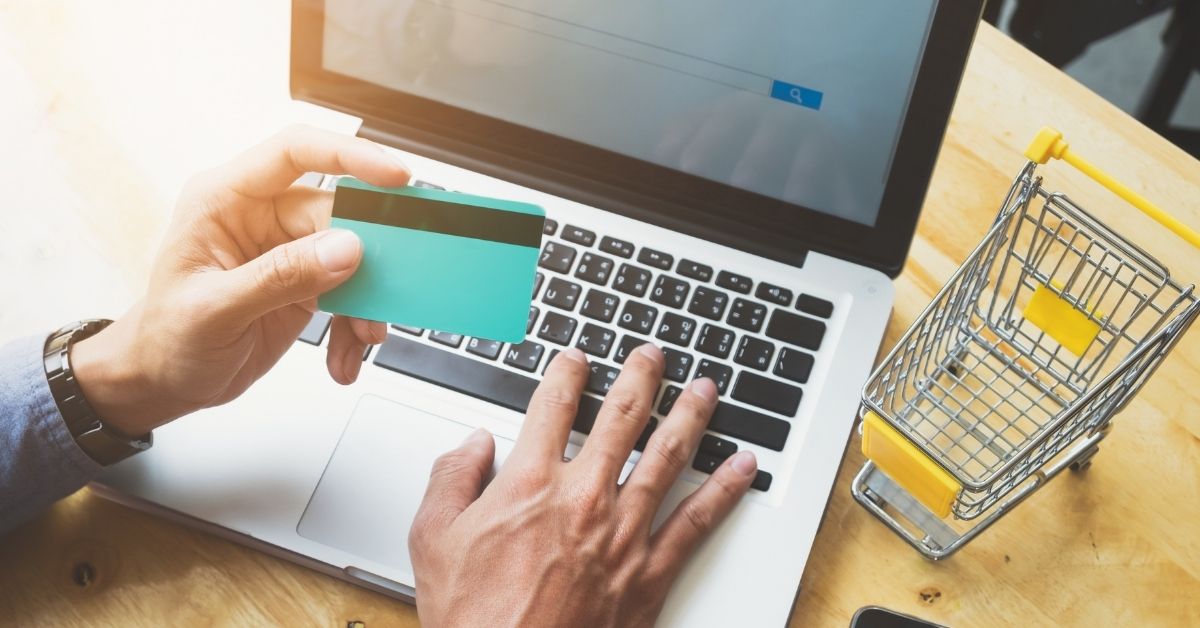 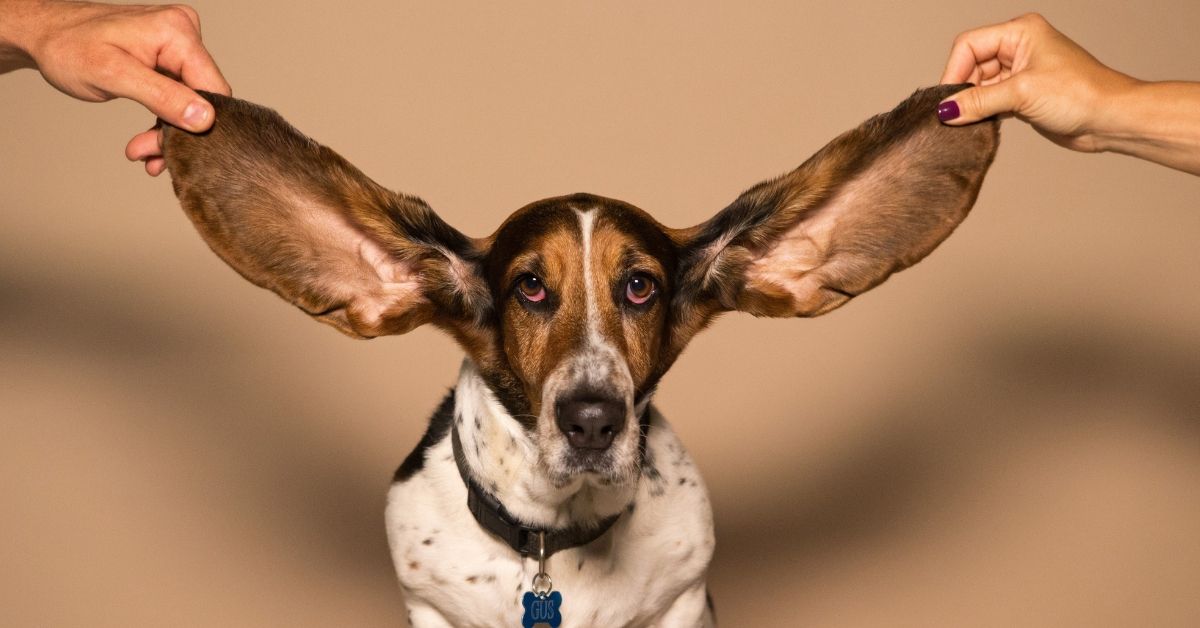 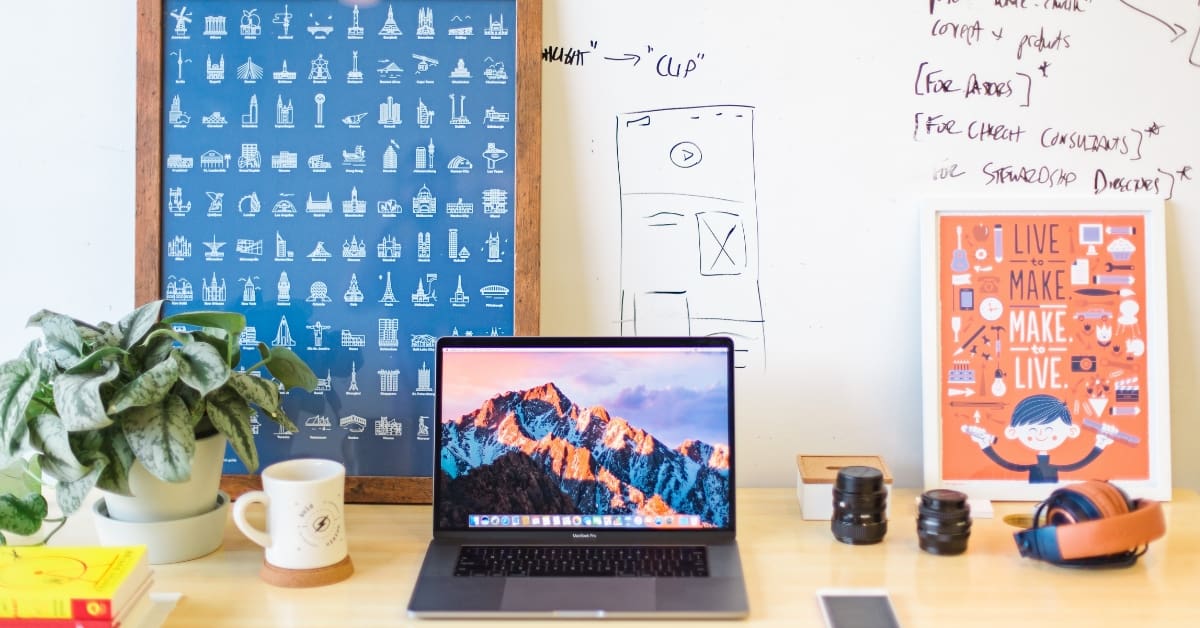 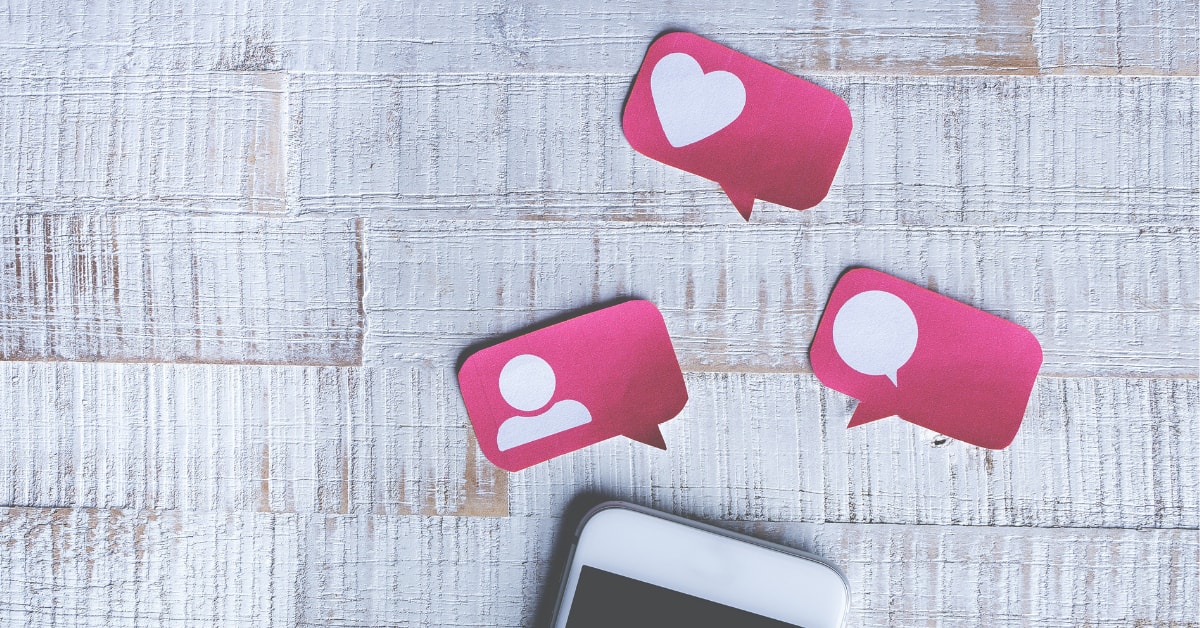